This would be the first Bangkok Specials – The Maeklong Railway is a 1,000 mm railway that runs for nearly 67 kilometers between Wongwian Yai, Bangkok, and Samut Songkhram in central Thailand. The railway became famous for its route through the Maeklong Railway Market, nicknamed Talat Rom Hup, meaning the “umbrella pull down market”.

It is one of the largest fresh seafood markets in Thailand and is centered on the Maeklong Railway’s track.Whenever a train approaches, the awnings and shop fronts are moved back from the rails, to be replaced once the train has passed. I would say `I have to watch this with my own eyes’. 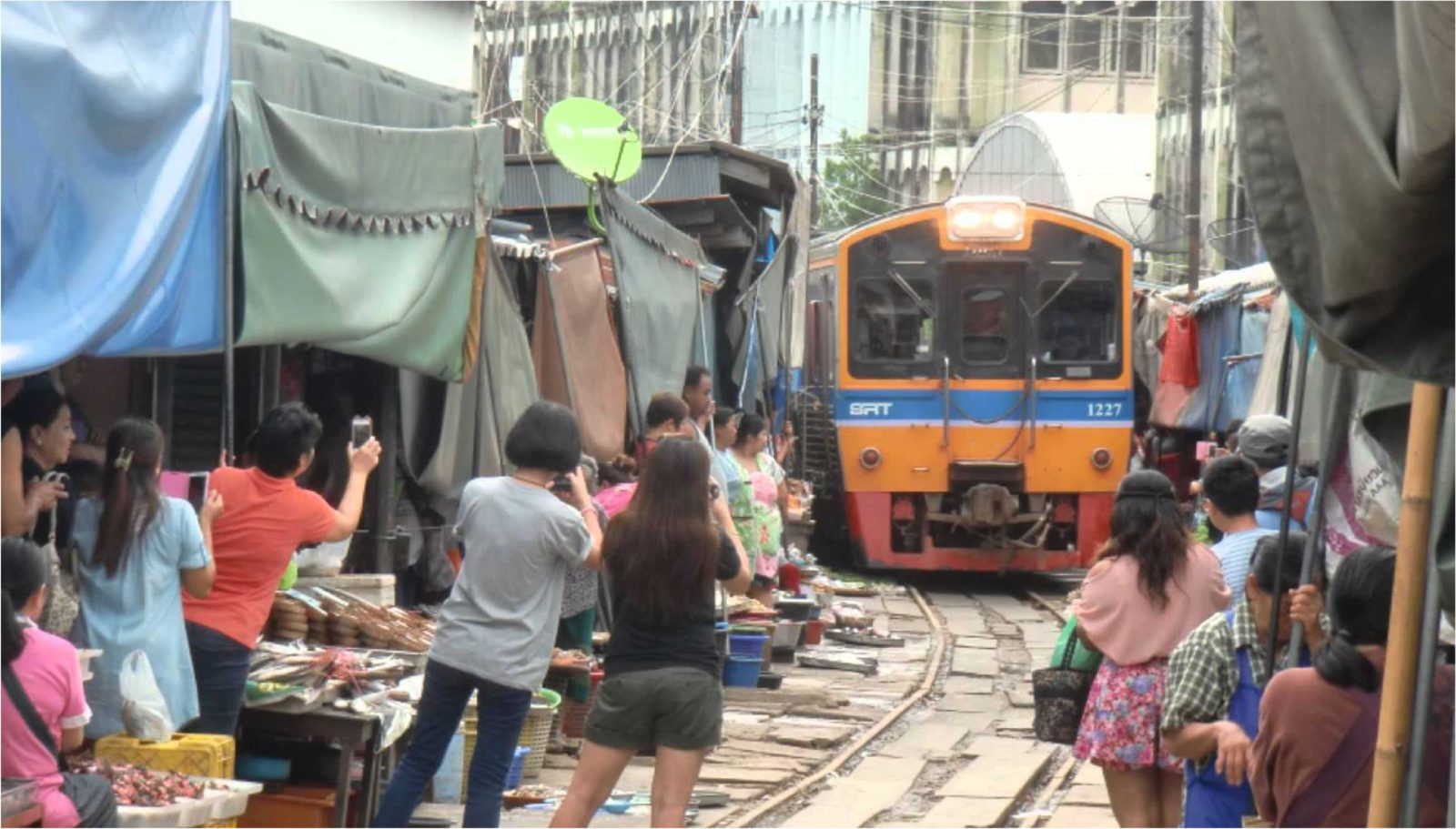 Every morning, around 08:30 the train approaches the Mae Klong station. Vendors quickly dismantle their stalls and umbrellas so that the train can pass. Then, like magic, everything is put back into the same spot as soon as it is gone.

This will be my second Bangkok Specials as Thailand has 3219 Kilometer of coastline. Ko Pha Ngan is an island in southeast Thailand that’s renowned for its monthly Full Moon Parties. Thong Sala Night Market is the Island’s `capital` and main ferry port. We have Koh Samui which is Thailand’s second largest island (After Phuket). There are lots of diving spots around Koh Samui.

Koh Mak is a beautiful tropical island in Thailand with white sands and stunning clear blue water. It’s the perfect place for a relaxing holiday.

Each of these main beaches has `other beaches around it’. Check out the full list of must-see beaches here.

The most popular and main river of Bangkok is the Chao Phraya River. It’s also the place where you get to see many beautiful hotels, temples, and bridges of Bangkok. The best way to see all at a glance is to take a Chao Phraya Boat during the day or if you want something more unique, take a Dinner Cruise.

You can avoid the overpriced tour, though. You can ride the water taxi up and down the river for around 20 baht. Start at the central pier, go to the end, and come back. That’s it!

The difference with the official tourist boat, which makes fewer stops, is that they have someone that gives brief descriptions of important sites as you go.

Muay Thai is a combat sport involving striking and clinching, is everywhere in Thailand and Thais take it very seriously. Fighters train for years. Now there are the touristy Muay Thai matches and then there are the traditional ones. To see an authentic match with world-class fighters in Bangkok go to the Rajadamnern Stadium.

You can also watch the “Muay Thai Live: The Legend Lives” is an epic live-show that captures 300 years of Thai Boxing’s history through combinations of fights, stunts, drama, music, astonishing light system and sound effects.

You can get more info on their Facebook page: www.facebook.com/muaythailive.bkk

Lumphini Park also known as Lumpini or Lumpinee is a 142-acre park in Bangkok. So if you like greenery, you can’t find much in Bangkok as you really don’t even get to see many trees along the road. So, the best place is to Lumpini Park, where you get to enjoy fresh air and nature.

Lumpini Park is Bangkok’s, Central Park. This sizable green space is well worth a visit if you’re a people watcher. At all hours of the day, you’ll find people playing sports, walking, biking, practicing tai chi, or just relaxing.

Formally known as `the Thao Maha Phrom Shrine’, is a Hindu shrine in Bangkok, which houses a statue of Phra Phrom, the Thai representation of the Hindu god of creation Lord Brahma. A popular worship attraction, it often features performances by resident Thai dance troupes, who are hired by worshippers in return for seeing their prayers at the shrine answered.

Location: The shrine is located at the Grand Hyatt Erawan Hotel, at the Ratchaprasong intersection of Ratchadamri Road in Pathum Wan district. It is near the Bangkok Skytrain’s Chitlom Station, which has an elevated walkway overlooking the shrine. The area has many shopping malls nearby, including Gaysorn, Central World, and Amarin Plaza.

Many come here to pray because Erawan Shrine was originally built to ward off evil and it’s famous for bringing good fortune.

Do not hesitage to give us a call. We are an expert team and we are happy to talk to you.